My mom was 9 when America entered World War Two.  She watched as cousins, uncles, her first crush went off to war.  She went with her parents to see the news reels and watched for familiar names in the rolls … Continue reading → 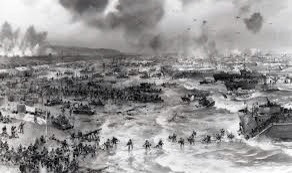 Today is the 70th anniversary of a key battle in WWII, D-Day. This battle marked the end of the Totalitarian regime of Hitler. Although, it would take another year of fighting before the war would end.

So many lives were lost on this day, so much bloodshed and so much pain. This is a somber day for all who survived, for all those who are still alive and can share their story of one of the bloodiest battles in the war.

Listen to the stories from soldiers on both sides. They do not discuss politics, they do not discuss who is right and who is wrong. Their stories are in the moment. They talk about bloodshed, loss, killing. The images of that day a burnt into their minds and souls. When they sleep, they return to it. When it’s quiet the screams echo in their ears.

For the Allies, winning the war is little compensation for the burdens that they took away from the beach that day. For the German alliance the shame of losing only amplifies the pain suffered.

When it boils down to a single battle, the ultimate winners and losers are not what matters it’s that split second when your adrenaline is pumping, when your eyes see, but your brain can’t absorb the horror. It’s that moment when you swallow your fear and you training takes over like an auto pilot on a plane. It’s the smell of the sea mixed with diesel fumes, the acrid scent of gunpowder, and the high metallic perfume of spilled blood.

No one escaped that day. No one was a mere spectator. Some of their wounds are visible but for all the worst are not.

Remember D-day for freedom, for the end of the war, but remember the soldiers who fought because they had no choice. Remember them as example of what hell truly means.
And remember all the horrors of this war as an example of why we can not allow this to happen again.

We are already forgetting, we are already allowing genocide to occur. Don’t dishonor all those who fought to stop this in WWII.

I admire the German people of today. Humbled by the past, they are determined not to repeat it. We need to do the same, no race is worthy of annihilation. No single country should dominate and forcefully invade another peaceful country in the name of expansion. If you have a voice, honor those who could not speak, stand up for justice and for the freedom to live.

In honor of Anthony “link” Cedrone rest in peace, tin can soldier.